Its name derives from the Greek terms nomos and adelphia, meaning: “Where brotherhood is law”. Nomadelfia defines itself as “a proposal”, an alternative model of social life to that usually offered by Western societies. Its members, all practicing Catholics, adopt a lifestyle inspired by what is reported in the Acts of the Apostles. Nomadelfia, situated near the town of Grosseto in Tuscany (Italy), is a communitarian population rather than a community. It is small, with its own Constitution based on the Gospel. Founded in 1948 in the former concentration camp of Fossoli by Don Zeno Saltini, since the beginning its purpose has been to give a father and a mother to abandoned children. The care of orphaned children and teens, a response to the social emergency of abandonment between the two wars, was the spark that gave birth to Nomadelfia. Today this phenomenon is less extensive, but it still exists, in less evident but more complex forms. That is why Nomadelfia is still active in sheltering those in need, in the legal form of foster care. It currently has about 300 people, 50 families divided into 11 groups, of which almost half are children and teens. In Nomadelfia, all possessions are shared. In the spirit of evangelical advice, the population of Nomadelfia leads a life characterized by moderation. In Nomadelfia, there is no circulation of money. Everything is designed to guarantee decent living conditions for every human being. 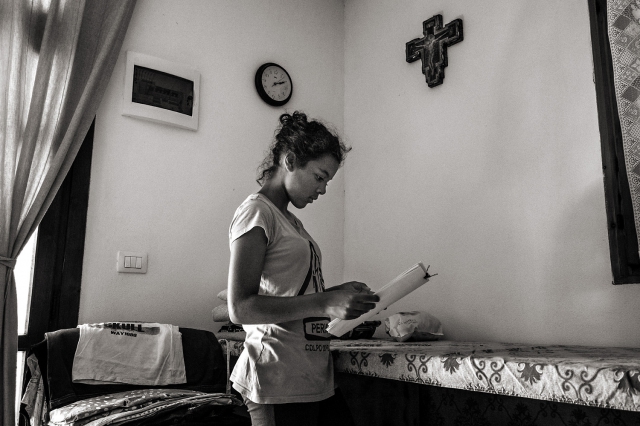 Born in 1962, Enrico Genovesi lives in Cecina, near Livorno in Italy, and he has been taking photographs since 1984, essentially dedicating himself to reportage of social issues, focused on Italian stories. His images have been published in several magazines and many of his works have been published by state agencies including the Ministry of Justice, the National Health Service, and European Community partners. He has cooperated with the Grazia Neri Agency, and until the end of 2012 was represented by Emblema photo agency.