On December 11th, 2019, the European Commission launched the Green Deal, an agreement for facing critical environmental issues. It aims to achieve climate neutrality by 2050 and includes a great number of measures concerning the sustainability of transport, the preservation of biodiversity, the planning of a new agricultural system, and the introduction of sustainable nutritional sources.

Concerning this last point, the European Commission developed "Farm to Fork", a strategy that aims to redesign food systems to reduce greenhouse gas emissions and the consumption of natural resources. To implement this transition, "Farm to Fork" promotes the production and use of new protein sources such as algae and insects, the latter having already been indicated in 2013 by FAO as an excellent alternative for the future due to their organic properties and their easy availability.

Based on these scientific assumptions, in recent years the first cricket farms have sprung up in Europe for the production of flours, which are currently used as feed for reptiles and other animal species while awaiting final regulatory approval for human consumption.

Several studies have shown that this type of farming is highly sustainable, since it produces a very low percentage of greenhouse gases, sets at zero the land-use factor and has a very small water footprint.

In Italy, the message from geopolitical futurists, technicians and scientists has been picked up by a small start-up company that opened for business in the Marche region in 2016. Its name is Nutrinsect Srl and it was set up with the aim of producing small quantities of cricket flour and optimising industrial processes for future large-scale production. 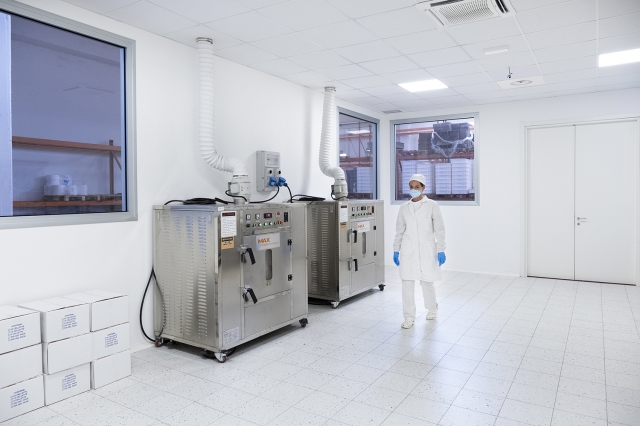 Pietro Romeo graduated from the University of Bologna with a thesis on the aesthetics of amateur photography. In 2016 he began working as a photojournalist, focusing his attention on places of social gathering and collective rituals. Recently he has expanded his interests by embracing contemporary issues such as environmental sustainability. Over the years his work has been published by, among others, Die Tageszeitung, Specchio - La Stampa, InsideOver, Il Reportage, Geographical Magazine, Vice Deutschland. In 2019 he was a finalist for the Marco Pesaresi Prize (Savignano Immagini) with "Emilia's Last Dance", which chronicles the world of ballroom dancing and dance halls in northern Italy. The project won the Laviosa Foundation Award in 2021. He has lived in Berlin but is currently based in Bologna and collaborates with the photography agency Parallelozero.