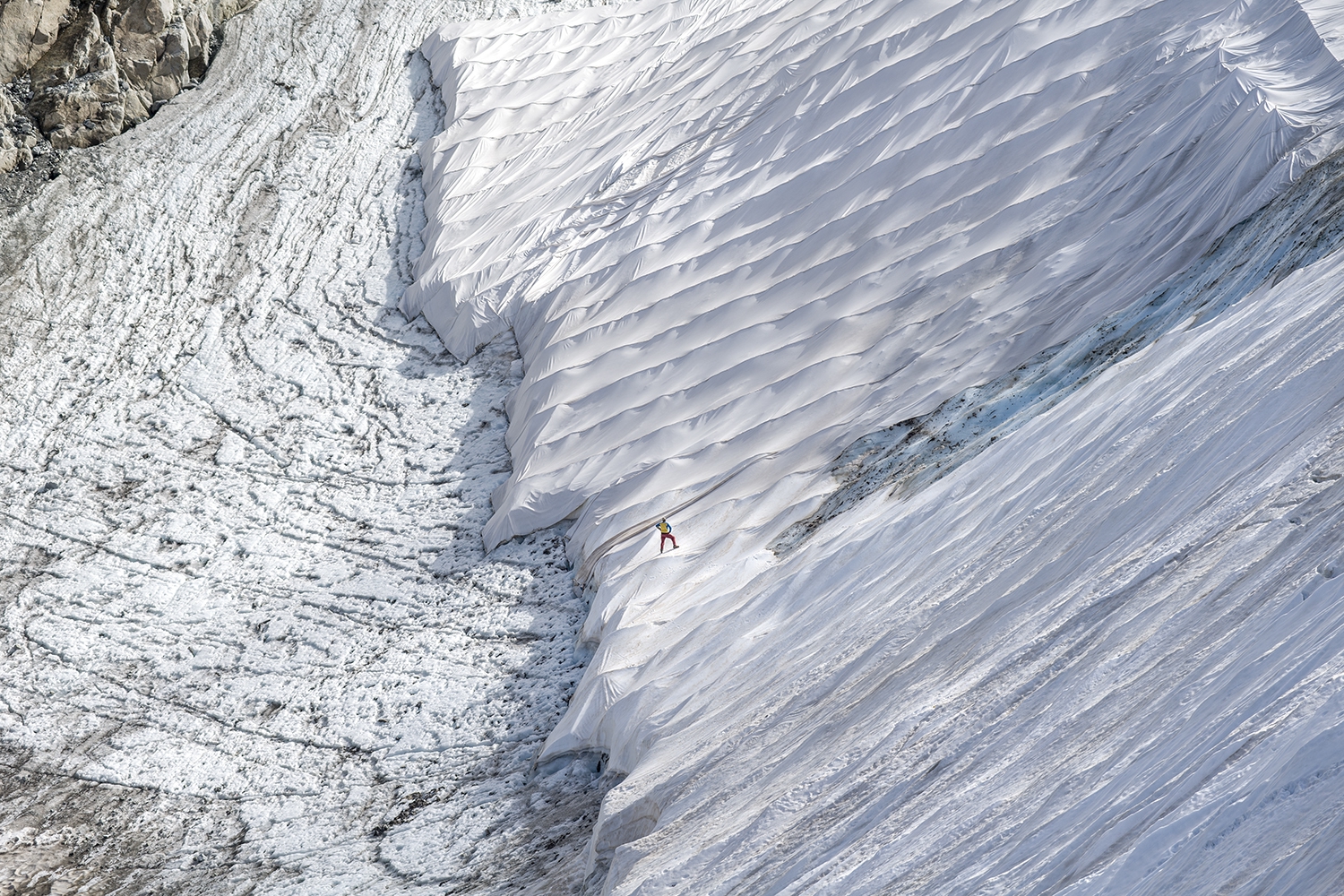 September 7th 2020. Nicola removes geotextile sheets from the Presena glacier. The sheets are unhooked from below and then removed using a snowcat. The sheets are unfastened from below and then rewound with the snowcat. In the photo we can see the area between the covered and the uncovered part, which represents the amount of snow that was preserved during the summer.  The effects of climate change pose a serious threat to Italy’s glaciers. Since 2008, part of the Presena glacier in Trentino Alto Adige has been covered with geotextile sheets that have been sewn together. This operation grew out of the collaboration between the Carosello Company (which also manages the ski lifts), the University of Trento and the University of Milan. Over the years, Carosello has continued the project, which has a dual function: to guarantee that the ski slopes and therefore the ski lifts are operative during the winter season and to try and keep the glacier alive. It is estimated that since 1990 the glacier has been shrinking at a rate of about 10 meters per year. According to the Province of Trento, between 1993 and 2003 the surface of Presena decreased by about 40%, from 68 hectares to 41. At the start of autumn, the geotextile sheets are removed ahead of the first snowfall. The covering operation reduces the melting of the ice by about two thirds, thus saving almost 2.5 metres of snow, for a total of 400,000 cubic metres. Nevertheless, the glacier is slowly losing ground and the change is extremely visible, especially if we look at photographs that were taken only a few years ago. The annual cost of the operation is around 500,000 euros which the Carosello Company invests in order to guarantee the operation of the facilities for winter tourism. The Presena glacier is located on the border between the Lombardy and Trentino Alto Adige regions, and the summit is 3,000 metres.

Michele Lapini (who was born in 1983) is a freelance photographer based in Bologna. He studied Development Economics and International Cooperation at the University of Florence and holds a Master’s Degree in Development, Cooperation and Human Rights from the University of Bologna. His photographic work is characterised by a deep interest in social, political and environmental issues. He has been a contributor to La Repubblica since 2016, for both the national and local editions. In addition to his work as a photojournalist, he also exhibits and operates in various sectors: cinema, publishing and public art. He's a co-founder of Arcipelago-19, a collective project that was set up during the Covid-19 lockdown. His work has been published in international and national magazines including Internazionale, Stern, El Pais, L'Espresso, The Guardian, Vice, Le Monde Diplomatique, Corriere della Sera and the aforementioned La Repubblica.